For three years I’ve been sowing prayers. Spreading the desire of my heart, grafting a hope for the church into other people’s prayer lives.

It’s a prayer for women to be seen on altars throughout the world – sharing of their encounter with the Risen Lord who has commanded her to go and tell the Good News.

A holy cacophony of hope for the Roman Catholic Church’s fidelity and healing — rising up with a shared desire.

What else can we do but to pray and wait? Continue to work and witness. How else does one expect an institution as large and complex and fraught as the Catholic church to change?

Flying above the earth today, the Pope sent his typical mixed message. He indicated (in keeping with his synodal approach to governance) he may use his papal authority to keep the door of discourse and discernment open: “I’m not afraid of studies.” Significantly, he said that the commission’s initial report:

“Could serve as the launching point for going ahead and studying, and giving a definitive response as to yes or no, according to the characteristics of the era.”

These comments come ahead of the Pope’s anticipated meeting later this week, with the International Union of Superior Generals, who first put the question to him about the diaconate three years ago.

I want to tell the women religious what their question has meant for my whole little life. How they have given me something to follow. How they opened up a discourse that is already altering the shape of my life. I offer prayers of thanksgiving and endurance for Dr. Phyllis Zagano, the seemingly tireless force refusing to let the conversation die out. Achingly slow, there is still good news whispering to keep on.

Sunday I attended the ordination of a woman I love; who I got to know while she was incarcerated and who I worked with as a colleague. At 67, she is now ordained in the Free Will Baptist Church, in the very church her grandfather shepherded. Rather than retire in her freedom, a call to prison ministry drives her forward through every seminary course and state chaplaincy requirement. At the reception afterward I chatted with the team of Catholic women who have been leading prison ministry for over a decade. Their ringleader pulled me close, arm on my elbow:

“I was at a meeting of the Knights of Columbus, and would you believe it, the chaplain asked all of us there to be praying on May 10th … He said, ‘especially you women, be praying. Be praying for our church and the Holy Father as they look to the possibility of women deacons.’”

For three years I’ve been cultivating this possibility. It’s rooted in my veins: nourished by study, friendship, grace. It’s bearing some fruit: I now work for the local church, am on the Bishop’s payroll. I lead the RCIA, the Bible studies; I catalyze adult faith formation programs, organize potlucks, write the prayers of the faithful. I’m laboring in the vineyard, growing in the desire to love and serve God’s people.

A priest tells me the story of . recent encounter with a friend’s mother. She is in her fifties, and shared a recent revelation: “Jesus had women disciples.”

It’s tempting to scream: NO KIDDING. But I should not rob this woman of her learning, her discovery. We should not blame her for not seeing them there. Their stories and presence remain obscured even as their witness pervades the Gospels. Feminists are continually denigrated by church officials. Their message gets filtered and distorted, obscured and buried. But it is a tenacious mustard seed. It is scattered throughout the world. The LORD promised that wherever the gospel is proclaimed, what she has done will be spoken of. (Matthew 26:13)

Still, I’m saddened that this is news for a lifelong Catholic. That the “memory of her” is so suppressed in our imaginaries. I lament at how diminished we are, how characteristic this is of the era we are in.

While on a parish retreat this January, I sat on the Carolina coast watching birds at dawn racing across the ocean, ostensibly to feed. I didn’t know where they came from, or where they were going. They flew for their lives, they kept coming. Driven by hunger, desire, instinct.

Later that day, in contemplative prayer, I closed my eyes and received a surprise gift of meeting. I was walking toward Pope Francis. He was warm, approachable. We looked at each other: he at me, I at him.

Eventually, I spoke: Holy Father, it is time.

A mystical vision? A prophecy? A fantasy?

The desire of my heart, pictured in my mind. God’s desire, revealed in consolation at prayer?

Holy Father, it is time. Restore women to the diaconate. Commit to advancing the conversation and dialogue.

This May 10th, and the many days that follow, I’d ask you, dear readers, to join your hearts and souls in this prayer for the Roman Catholic Church. It is not the only witness to the Resurrection, though it is an enduring one.

Pray that we not be afraid of learning from fellow Christians, from those outside the folds of God’s flock. Learning too, from those deep within, serving in parishes, gifted with words to preach but denied ambos to stand in.

Pray that the church open the door to restore women to the order of permanent deacons. Pray that in a discernment, we might be surprised at how near we are to one another in our desire to be faithful disciples.

There is still Good News to proclaim, there is much labor to share in for love of another kingdom. And so many women taking flight, coming from every direction, driven by desire for the Risen Son and called to follow wherever the Holy Spirit would send us.

Note: If you want to learn more or become involved in a wider dialogue please reach out. Join your story to others at Catholic Women Deacons. Consider getting a group together to read Phyllis Zagano’s Book on Women Deacons, and make use of this marvelous study guide to accompany a very readable, transformational text. 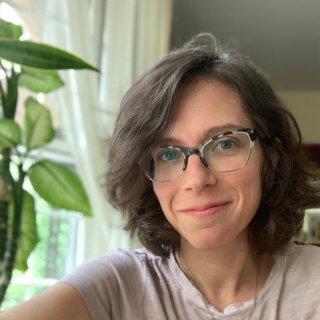 I believe agitation is holy, poetry is the fuel of the spirit, and that there is room for everyone in the Gospel's love-work of liberation and healing. Originally from Boston, now proud to call Bull City home where I work as a Minister of Social Action & Discipleship at a vibrant parish, and live with Micaela (8) Teddy (6) and my partner Felipe, who believes his purpose is to help me live out mine.