In Canada, there are about 850 students enrolled in advanced degrees in Theology in ATS-accredited schools, and of these about 450 are women. So women are enrolling in higher numbers in degrees such as the STM, MTh, ThM, ThD and PhD. There was very little reporting in the ATS schools of ethnic identity, but we can see that, of those who reported, the vast majority was white. 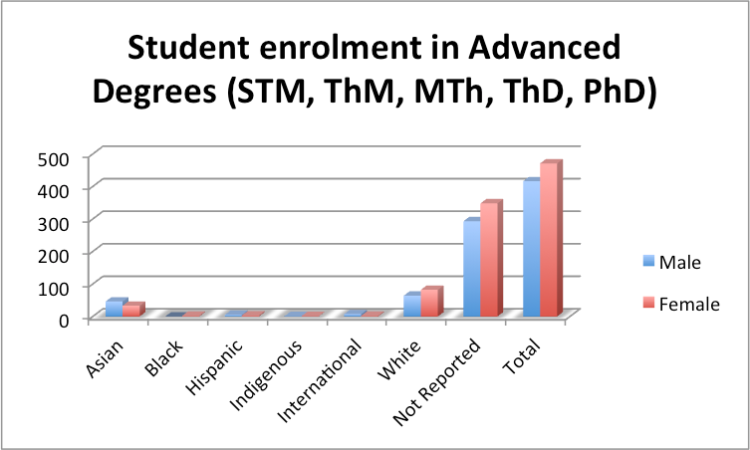 Yet, in spite of the fact that over half of theological students are women, women are very poorly represented among faculty in Canada. According to the most recent ATS statistics (2016 Annual Data Tables), there is a vast disproportion of men to women in theological higher education. Only about a quarter of women hold regular full-time academic posts in Canadian ATS-accredited schools (26%). 38% of whom are Assistants; 22% Associates; and only 14% are Professors, which leads me to wonder how the women who are in their junior ranks and especially those who are untenured will fare as Canadian theological schools face greater and greater financial pressures in an increasingly secular country.

It is also helpful to compare this to national average according to Canadian Association for University Teachers’ data on the percentage of female faculty members, which is 43.2%.

The Association of Theological Schools has twenty-eight member schools in Canada. Of those schools, only one has a top senior administrator who is female. In case you were wondering, that is 3.6%. (I was going to create a graph, but it was just too ridiculous). Compare this to women’s leadership in the wider Canadian context, in which, according to University Affairs, women hold just under twenty percent of senior academic positions. Of course, this number is still too low, but it is starkly better than 3.6%!

At last year’s (2016) Canadian Theological Society annual meeting, only 20% (6 in 30) papers were presented by women. This year, we are slightly better with 24 percent presented by women; seven of twenty-nine. Compare this to our sister society, the Canadian Society for the Study of Religion, in which 40% of the individual papers that were given this year were by women (twenty-seven from sixty-nine papers).

The picture is even bleaker when we consider questions of ethnic diversity. As we can see from this graph, the overwhelming majority of over 250 scholars of Theology in Canada are white. Only one person identified as Indigenous; one as Black; one as multiracial. 12 of 258 scholars identified as Asian or Pacific Islander.

Things are not likely to get better for women or ethnic minorities in theological education in Canada because many of those 258 positions are not likely to continue. Within the past five years, four theological colleges have suspended their programs: The University of Winnipeg, Queen’s Theological College, Saint John’s College (University of Manitoba), Emmanuel St. Chad, and the Vancouver School of Theology faced financial exigency back in 2012, which caused it to cut several faculty member positions. Clearly, the growing secularism of Canada, declining church membership, and the increase of religious “nones” mean that the fate of theology is not likely to improve and that those who aspire for a career teaching theology are unlikely to have their hopes met.

For what it’s worth, I offer a few modest suggestions for young women scholars in Theology, and those who mentor them. These are the things that I wish I had known twenty years ago when I embarked upon theological education:

Jane Barter is Professor of Religion and Culture at The University of Winnipeg. Jane has published several works of Christian theology including "Lord, Giver of Life" (Wilfrid Laurier University Press, 2007) and "Thinking Christ" (Fortress Press, 2012). She also writes and researches in the areas of continental philosophy of religion and feminist theory. Jane is also an Anglican priest.