This week a warm and gentle southern breeze blew like grace through my (already) chilly northern city: the incomparable Dolly Parton came to Winnipeg as part of her “Pure and Simple Tour.” There are so many ways that she exploded all expectations, as she has been doing all her life—her graciousness was breathtaking, so was her musical versatility, and her infectious energy created an evening that was nothing short of magical.

Many commentators have discussed the supposed contradictions of Ms. Parton: of an external appearance that is judged to be at odds with her acumen and serious talent, of the kind of feminine glamour that seemingly jars with her depth as a woman. But those commentators are wrong, because Ms. Parton knows a thing or two about aesthetics. I believe that hers is a deeply (but exceedingly rare) Christian moral vision.

As she tells the story, her people were “Holy Rollers,” meaning they would have so much fun singing and dancing in church, that they would just roll people on down the aisle who were in the way. Thankfully, the Pentecostals of Locust Ridge, Tennessee were not infected by that most insidious of Christian heresies: Platonism. They did not look for a deeper meaning in the text or in the world. Jesus was in the word and in the church, in the trees and in the goodness of family and in their small town. This did not mean that any of these things were perfect, but Jesus was there just the same, his face shining off the Tennessee mountains and dancing in the fireflies:

Sittin’ on the front porch on a summer afternoon

In a straightback chair on two legs, leans against the wall

Watch the kids a’ playin’ with June bugs on a string

And chase the glowin’ fireflies when evenin’ shadows fall 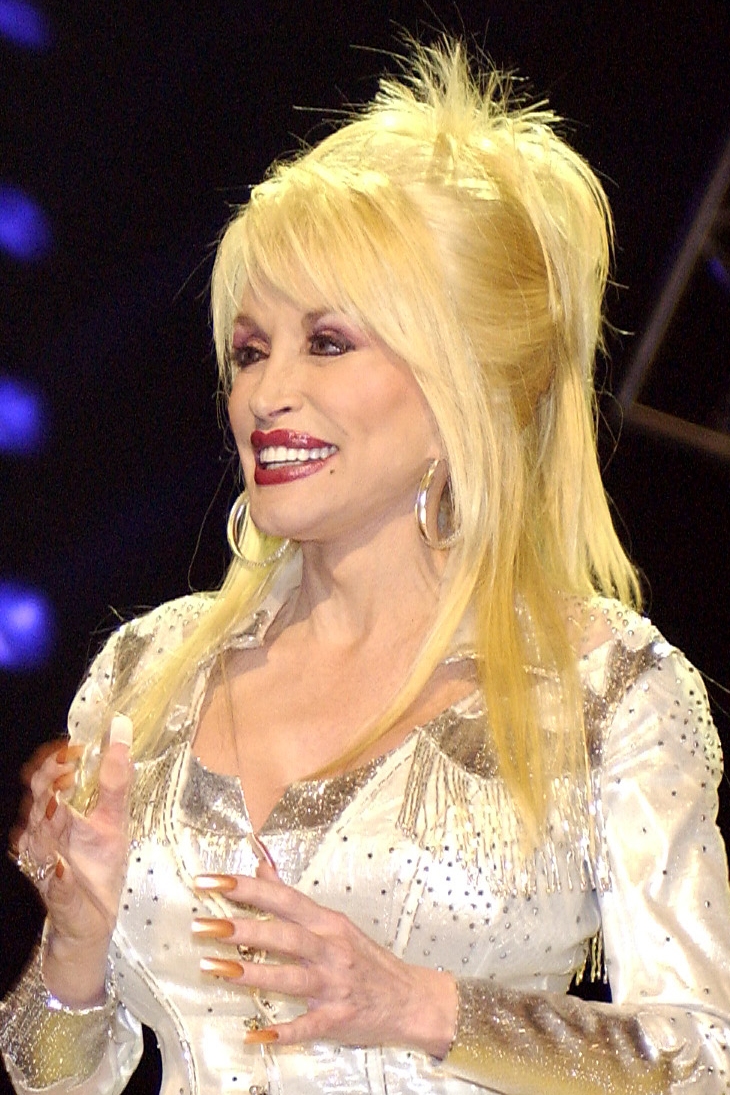 Ms. Parton grew up very poor in a family with twelve children. She tells the story of going into town with her “Mama and Daddy” in the front and the kids piled in the back of a pickup truck. One day when she was about seven or eight she saw the most beautiful woman she had ever seen. The woman’s bouffant hair was a vivid bright yellow, and her lips were an intense scarlet. She later learned that this enchanting vision was the town prostitute. As Dolly tells it, she spent the rest of her life trying to look just like that woman. Small-town prostitutes are the source of endless derision to locals, but to Dolly she was and remained patently beautiful. In an interview, Dolly Parton shed insight on this aesthetic vision: “I’ve often said people don’t come to see me to see me, they come to see me to see them.” (http://www.huffingtonpost.com/entry/dolly-parton-wee-bit-gay_us_57854029e4b07c356cfec95f). Parton saw this woman in all her proud garishness and it was good. It was very good:

Honeysuckle vine clings to the fence along the lane

Their fragrance makes the summer wind so sweet

And on a distant hilltop, an eagle spreads its wings

An’ a songbird on a fence post sings a melody.

To see the world as Dolly sees it is to see the beauty of the finite–beauty on the surfaces of things. It is not to plumb into the world’s hidden depths or secret revelations. It is instead to find within the world, within this life–even in its brokenness and pain–a goodness that is also real because it has been visited by grace. Such a grace has not displaced or interrupted the thing’s identity, it has simply confirmed it. To see the world as Dolly Parton sees it is to abjure that perennial Christian sin of wishing to convert or reform; it is instead, dwelling in the beauty of what is. It is, as she inimitably puts it, “leaving no rhinestone unturned.”

It is no surprise, then, that her conservative Christian background did not for a moment inhibit her from appreciating (one of her favourite words) her many LGBTTQ* fans. As she put it: “I’ve been around so long, so a lot of people grew up with me. I feel more like a family member or an aunt or an older sister or a friend. They know I’m a little different myself. I’ve fought for the right to be myself, so that is one of the reasons that the gays and lesbians relate to me. They know that I appreciate everybody for who they are. We are who we are, so why can’t we be allowed to be that? I ain’t out to preach no sermons, I’m just out to do my work, sing my songs and write them, and love people and share them.”(https://www.theguardian.com/music/2016/jul/12/dolly-parton-tour-hillary-clinton-lgbt-community)

This is not incoherence in Parton’s thought–it is consistency, pure and simple. To appreciate everybody for who they are is to see the world as one in which grace is already at work. It is to see others as requiring nothing to reform, nothing to alter or curtail. The only proper response to such grace is a smear of lipstick, a large measure of glitter and rhinestones, and lavish and wide appreciation:

And when the folks ain’t lookin’, you might steal a kiss or two

Jane Barter is Professor of Religion and Culture at The University of Winnipeg. Jane has published several works of Christian theology including "Lord, Giver of Life" (Wilfrid Laurier University Press, 2007) and "Thinking Christ" (Fortress Press, 2012). She also writes and researches in the area of political theology. Jane is also an Anglican priest.