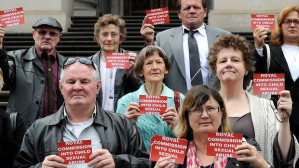 The Australian government is currently conducting a Royal Commission into institutional responses to child sexual abuse. A major focus of this investigation has been the church; how the individual denominations have responded to allegations of sexual abuse, and how the denominations, in many cases, worked to cover abuse up. Having followed the lead up to, and evidence given to the commission fairly closely, I was not entirely shocked, but certainly disappointed to witness a number of religious leaders behaving defensively.[1]

What saddened me, as the evidence mounted up against the various churches, was the deep level of defensives rearticulated by lay members of denominations. Having known a number of people directly and indirectly implicated and associated with various cases before the commission, I was involved in a number of conversations that mirrored institutional patterns of self-justification and diversion. I was told that the bare minimum legal requirements had been met on many occasions (as if the Church, that which continually argues for a particular moral and ethical ordering of society, should be celebrated for doing the very least expected of them). I was exhorted to think of offender’s families, and the great cost to them in a time of public transparency. And I was I was reminded that all people sin and that we are not to judge. In short, I was reminded that institutions protect themselves at all levels of participation, and that power is always mobilizing to protect the powerful and the power discourses of those very institutions.

Of course the Church has a unique explanatory power when it comes to responding to the handling of sexual abuse. A tragedy laid plain in the testimonies given at the Royal Commission, is that religious institutions not only dealt inadequately (and this word is hardly strong enough) with allegations of sexual abuse in the past, but that they can continue to do so. And it seems this defensiveness is made possible by the theological discourse that is rehashed time and time again.

In a particularly insidious way, the church does this as it attempts to administer “pastoral care” to perpetrators. Of course, few Christians would deny this need, but the manner in which the church moves quickly to care for and protect perpetrators is telling. This version of pastoral care simply demonstrates the power that is employed in ultimately blaming the victim. That is, it suggests that it is the perpetrator that needs protecting. And every time this happens, a new survivor learns that they too will be held responsible, that the organisation needs protection from them, and that holding perpetrators to account and speaking publicly will always incur condemnation. In this, that weird reversal that is at the core of rape culture has been effected – the survivor, and their allies, have now become the abusers.

These moves are usually accompanied with talk of Sin. The doctrine of sin is evoked as this radical equalizer; a central tenant of the church that calls us into greater humility when discussing a perpetrators actions. More often than not, the consequence is that sin is utilized to completely flatten out power dynamics and to shut down public conversation. Consider a non-disclosure agreement in compensation granted by churches: “sin” has been acknowledged, but no further discussion into the ordering of power will be engaged. What purpose does this doctrine serve in these arrangements, and in the theology of the church? “Sin” in this instance shuts down interrogation, it silences the voice of survivors, it attempts to gather up all the horrific details of abuse and bundle them up into a tidy pile of universal confession. In this way, sin becomes a protective sanitizer; a way in which the church, and church goers, can avoid the confronting reality that sexual abuse is repeatedly covered over and played down by religious institutions. Sin is therefore inverted, or turned back in itself, and is used to deny all particularly of abuse; for all have sinned.

As quickly as sin is ushered into this discourse, so, too, is repentance. The church is terribly “sorry”. Of course, we hope so, we often believe that this is true. But what does this achieve, especially when survivors continue to hear stories of cover ups and denial? In what way does this rhetorical repentance embrace a theology of repentance? Survivors, the public, want something far more radical than a few sentences of regret. They want more, they want institutional structures to be radically reformed, they want power to be critiqued, and they want those who have used their authority in cases of “mishandling” to cede power. They want the church to mean what the church often says its mean by repentance; metanoia. Sorry in this instance is never defensive. It is open, laid bare, in need of conversion. When a theology of repentance comes to mean a public statement of remorse, the church has emptied its own grammar of content. The repentance in this instance means nothing for the repentant; it is simply offered up as a means of closure, a way in which the acknowledgement of sin can acquire a full stop.

Many theologians are these days enamored with Christendom. They look to the state and see only a present evil age, and more, they look to the church and see a radically subversive new world order. In waging cultural wars against the state, they elevate doctrine and theology as a way out of the secular. And yet in matters of sexual abuse within the church, the state has been required time and time again to step in, to demand more of the church, to confront the church with their own evil. As the church continues to use theology to protect itself from the state and the secular – as in the case of sexual abuse within the church – the elevation of Christendom becomes laughable. Because like the church, the state is also invested in protecting people. And quite often that means protecting people from the church. In her first speech after losing leadership of her political party, and therefore losing the role of Australian Prime Minister, Julia Gillard said that she ‘very proud of having commenced the Royal Commission into child sexual abuse in institutional settings… it will change the nation. It will change individual lives as people get to come forward and tell their story. It will change the nation because we will learn how to better protect our children for the future’. For all the state’s failings, these instances of state intervention reveal the ridiculous nature of the interplay between church verses state, and the reluctance to think through alternatives. One might be tempted to simply suggest the problem as a matter imagination: the church’s picture of Christendom is not radical enough! But this, too, is rhetoric. It fails to consider how and why theological doctrines function in systems of power, it fails at its own call to conversion, and in the end, it is not even approaching sorry.

[1] After the Royal Commission was announced, Cardinal George Pell was quick to claim media has exaggerated the extent of sexual abuse within the catholic church. This is a man who has previously told world youth day attendees that “abortion is a worse moral scandal than priests sexually abusing young people”. Further, a leader of the Salvation Army, Commissioner James Condon, tried to reframe a clear case of sexual abuse as ‘inappropriate touching’, and later rebuked a pastor for reporting another case of sexual abuse to the authorities.