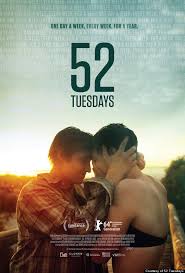 Deceptively brave and confronting, 52 Tuesdays tells the story of a mother and daughter each facing transition. For the mother, it is his personal transition into transgender identity; a coming out that happens in the opening scenes and through which Jane becomes James. Against this backdrop, Billie (James’ daughter) wrestles with her own transition into adulthood, and into her own embodied sexuality. When James announces to his daughter that he needs space during this transition period, they each agree to spend time together every Tuesday. And so 52 Tuesdays documents these visits, filmed over the course of 52 Tuesdays in real life.

The production of this film was highly unconventional (apart from the Tuesday only filming, nearly all the actors in the film were complete amateurs, and scripts were only provided a week in advance as the story itself evolved through and with the lives of the cast and crew), and still, or perhaps in part because of, this low budget Australian film won the world cinema dramatic directing award at this year’s Sundance film festival, and the crystal bear for best film from the youth Jury at the Berlin film festival.

There are many themes to explore in the film. Certainly the self-documentation of the 52 weeks recorded by both James and Billie raises questions about the power to control narrative, the internal struggle to tell one’s own story. As Sandy George notes, ‘both mother and daughter use self-documentation as a kind of divining rod, as though their own images might point toward a more authentic way to be’. [1] But possibly the most provocative moment in the film is announced when Jasmine, one of Billie’s teenage lovers, a young woman who is living with a severely agoraphobic mother, confronts Billie with these words:

This startling declaration brings into the focus the blurred lines of identity that are played out in the film. On one level this is about the relationship between parent and child; in the words of director Sophie Hyde ‘we were exploring the moment where you meet your parent as an adult and understand them as a real person. When’s the moment where you show your child all of who you are?’ [2] But then, it is not simply parents we are talking about, the whole film centers on this idea of motherhood and what motherhood has and will mean for Billie, and even more intensely, what it has meant for James (who recounts the long painful decade he has put off coming out because of his anxiety around gendered motherhood). James remains Billie’s mother right until the end of the film; James’ transgender transition in no way threatens or questions this designation. The subtle reoccurrence of Billie addressing her ‘father’ as ‘Tom’ seems almost trope like in this regard. In this way, many of the problematic notions about motherhood become apparent.

The films questions around trans identity helps us to push the motherhood category, or rather, to see it in its normative form. That is, for bodies with wombs that have borne children, an alleged and drastic ontological shift is enacted, and a new normative way of being embodied is established.[3] No longer women (which continues to be the norm for wombed childless bodies), these bodies, from all accounts, take on a new status as ‘mother’. To be a mother is to be caught up in this new quasi-subjectivity. I write this as a parent, one who almost always hesitates on this capital M word, this form that overwhelms me with its situated concreteness. Now, having endured the kind of discrimination and expectations placed on mothers, I find it hard to see a future in motherhood, or any sense in its usefulness as a term. And this is not only term; but category, occupation, designation, and ultimately a (my?) telos. In this framework – the mother as ontological point of reference – motherhood makes possible and only possible, the construction of socialised extras, such as ‘working mother’ or ‘mum I’d like to fuck’.

Ultimately, this fixed category of mother becomes a foundational lens in which we not only read the quasi-subject (who is mother) but through which other, childless subjects, may emerge in more fluid identities. That Billie’s story becomes the primary lens in 52 Tuesdays is hardly surprising, or to quote George once more ‘James’s life forms a kind of shadow to Billie’s, as mothers often become colourless, shapeless obstacles to their teenage daughters’.[4] At one point in the movie, James describes how angry Billie’s father was at him, because it took him ‘so long to find out who he is’. It’s a harrowing moment, and reveals the mothers position as somewhat of a zero-sum game. And yet James continues to subvert his status of mother – not due to the supposedly obvious implications of transgender transition, but because of his trans-formation back into a person who wants to be someone. And if having a womb and or being a parent has a future – at least for those of us who feel marginalised and oppressed by the normative categories of gender, and this peculiar ‘mother’ status – then there is something profoundly liberating in James’ subversion, because in the end, don’t we all just want to be someone?

[3] Of course, mothers who have not birthed their children often share a very similar experience. Perhaps precisely this experince. I am using womb language here simply because the dynamics regarding gender transition are used to startling effect in this film.