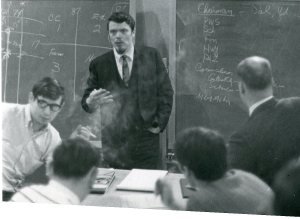 Over the last twenty years women have spoken out with ever increasing strength and entered into a new dialogue. They have discovered themselves and each other; they have also developed an amazing ability to envisage alternatives. [1]

Three months ago I arrived in the South Pacific preparing to join the faculty of a regional theological college. I had wondered about the status of women in the pacific churches and was not surprised to learn that 95% of the student body were men. I was also aware before coming that the faculty were entirely male and significantly older than I am. I thought I was prepared.

Like many Christian colleges, each morning commences with chapel. As most students live on campus with their partners and families, the worshipping community is quite large. The round chapel accommodates three seating sections; one for the women, one for the men (referred to as ‘the students’), and one for the faculty (the place where white bodies are found). On Friday’s Eucharistic service it is the men who come to the table first, it is the men who all present themselves before the women stand. This is unannounced and I am told not ‘a rule’ – nor the segregated seating arrangement – and yet it happens day after day, week after week. One day I sat with the ‘men’ and was well aware that a rule had been transgressed.

The faculty here are hardly conservative in their scholarship. Indeed, the institution is critiqued across the Pacific for being theologically liberal. And yet these practices, amongst others, do not seem to be challenged or discussed in any significant way. In a college where there are four mandatory ‘contextual theology’ classes in a Master’s degree, the context of women seems irrelevant, or at least a cultural artefact that should be left alone, or to use a classically Pacific term: taboo. Rather than cause me to think particularly about patriarchy in the Pacific, these months have led to greater reflection on theological pedagogy and what theological institutions look like in the south.

As a final semester PhD student I come from an institution generally assumed to be most liberal theological campus in Australia. And yet there too there were few female PhD students studying theology. Most women who do go onto doctoral studies are significantly older, often past retirement age. During the years spent researching in Sydney it was hard to find women doing theological research anywhere. The institution I was enrolled at had no women on full time faculty and not a single college in the whole city had a woman teaching theology full-time!

Is this theology in the south? Left to be a discipline taught by men for the benefit of male students?  Many (most) of the south’s prominent feminist, postcolonial, and queer scholars end up in North American or European institutions. Currently debate about these competing experiences and how they inform scholarship is going on in the context of biblical studies, with a clear division created between diaspora and @home scholars and the commitments these particular social locations dictate.  Faith, Feminism, and Scholarship: the next generation (published in 2011), offered itself as a book of diversity, and yet every feminist scholar that contributed to the publication was educated and employed within the United States. A feature that made the final section – ‘Walking the Talk: Embodied Feminist Pedagogies’ –not particularly helpful to the next generation outside of the US.

The answer is not simple, and it is all too easy to dismiss the benefits of collegiality and resources found in larger American or English institutes with diverse faculty representation. But one must question the affect this has on the future of scholarship and the future student bases of the regions they leave.  Where are the female students, especially younger women?  If theological study is intended to expose students to critical learning, shouldn’t we expect to see diversity in faculty and student representation in the years following, say, ‘second wave feminism’, for example? What then are the options for the scholar who represents and engages with those at the margin ‘down here’, scholars who want to work outside of North America and Europe? Is a woman – perhaps feminist – scholar relegated to a career of tokenism in the south? Is there really a whole range of alternatives – like Ursula King imagined almost thirty years ago – for those outside North American and Europe in 2013?

The high aims of theological pedagogy and even the possibility of a feminist theological pedagogy are challenged by the painful reality for those beyond the centres of institutional power. Nearly all recent scholarship on feminist pedagogy approaches the question from the perspective of engaging female students; albeit in non-essentialising ways. It seems however, that more probing questions need to be asked about institutional power and the oligopoly of ‘minoritised scholarship’. In the commodification of theological education and scholarship, the ongoing claims of ‘global theology’ (that is, the drawing of minoritised scholars to the centres of power) begin to look more like economically motivated strategies of homogenisation than attempts to diversify voices.

I am not pushing towards prescriptive moves here; but I have found the move from student to teacher is making the situation clearer. The reality is far starker than I originally imagined.